About the Charcoalition and the Proposed Mogo Charcoal Plant

In 2001 Australian Silicon Ltd. lodged a development application with the NSW Government for a charcoal plant near Mogo, Mossy Point and Broulee on Eurobodalla’s Nature Coast.

The development was classified as a project of State significance, so the Eurobodalla Shire Council did not have authority to approve or reject the proposal. 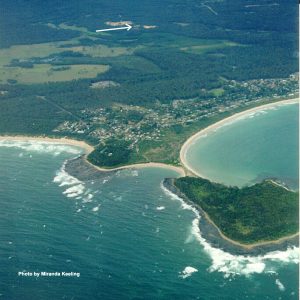 The white arrow points to the site of the proposed Charcoal Plant.

The company’s Environmental Impact Statement (EIS) was released in November 2001. It was regarded as a poor quality and piecemeal document, and the logging itself, more than double previous volumes, was not required to have an EIS.

Planning NSW received 1,530 submissions from 1,220 individuals and groups (including five local councils) in response to this EIS. Only nineteen of these submissions were in support of the project.

On May 1st 2002 the Minister for Planning, Dr. Andrew Refshauge, approved the development.

The Coastwatchers Association Inc. was concerned about the environmental impact of the plant on the air, water, and forests of our pristine area of the south coast, and the effects on employment in local industries, particularly the tourist industry. Tourism success in this area is largely due to Eurobodalla’s Nature Coast image and the many, and economically important, self-drive family visits.

The Charcoalition was set up as a subcommittee of The Coastwatchers Association Inc., to represent the thousands of people who did not want the charcoal plant. This determined and focused group worked tirelessly for over a year planning and executing a series of actions and events, and used the internet to rally the community against the proposal. 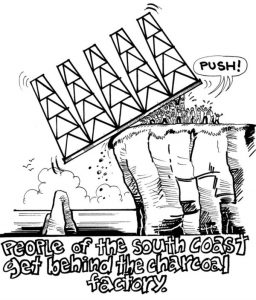 The community gradually became more aware of this proposed development following a meeting of about 100 concerned citizens at the Tomakin Hall on September 7th 2001. Following meetings at Mogo, Moruya and Batemans Bay attracted 400-500 people each.
The Eurobodalla Shire Council, Eurobodalla Tourism Development Board, Batemans Bay Chamber of Commerce, Aboriginal Land Councils, and many community organisations and businesses publicly stated their opposition to the plant.

On September 24th 2002 Australian Silicon Ltd announced that they would not be proceeding with the charcoal plant at Mogo, with strong community opposition to the project cited as one of the reasons for this decision.

The Charcoalition appeal in the Land and Environment Court, against the NSW Minister for Planning’s decision granting an approval to build a charcoal factory near Broulee, was upheld 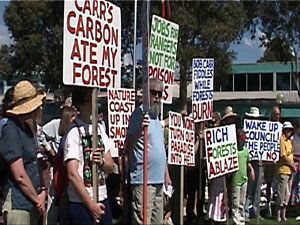 The campaign orchestrated by the Charcoalition for a charcoal-free South Coast was a magnificent team effort by a dedicated few people, taking on the full might of the NSW Government and the private sector, and strongly supported by the Eurobodalla community, the Greens (The Eurobodalla Greens offered Non-Violent Direct Action workshops), Wilderness Society, South East Forest Alliance, Conservation Council of the SE Region and Canberra, Nature Conservation Council of NSW and hundreds of other groups and individuals. 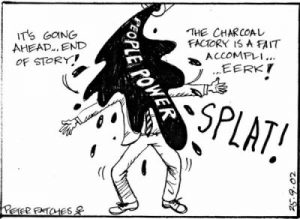