Charcoal Plant may head to Lithgow

The charcoal plant may head to Lithgow. the site here would be used for cutting and storing the timber, prior to transporting it via road and rail. Cr Vardon came up with this solution. Apparently, he thinks that using the site as a saw mill and storage dump will be acceptable to all.

In an interview on the 2GB Alan Jones talk back program on Tuesday morning, NSW Shadow Minister for the Environment, Andrew Humpherson stated that he believed “the planning approval process was compromised for the Mogo charcoal plant.” He also said he felt it was a matter for ICAC.

“Unqualified public support by Government for the plant, prior to a properly considered planning determination, put Planning NSW and the Planning Minister Refshauge in a position where approval was inevitable – despite the deep and legitimate community concerns.

He based his beliefs on two events, which Mr Humpherson feels proves his statements.

The first was based on comments made by Premier Carr to Brett Mason, a local journalist, during an interview, which took place during the Firefighters Parade.

Mr Jones walked Brett through the interview before speaking to the Shadow Minister, including questions asked of the Premier at the time.
Brett wanted Mr Carr to confirm or deny several rumours that he had heard regarding the plant.

Is it true that Eurobodalla is being used as a dumping ground to raise votes in Bathurst?

And, is it true that Labor has agreed to fund an election campaign for a councillor in the area?

The Premier denied both vehemently.

Brett reported that Premier Carr did however say there was “no need to worry, I have spoken to council and it is going ahead – definitely going ahead”.
This was in February 2002 – before it had planning consent.

Premier Carr denied that Brett’s interview ever took place in the Bay Post, on local radio on several other occasions.

Brett has written 23 letters to the Premier asking for an apology or an explanation of his denial, as it has done Brett irreparable harm in his home town.

He has not received a reply but was contacted by Michael Salmon, the Premier’s Press Secretary. Mr Salmon apparently tried to bully Brett into keeping quiet, according to Mr Jones.

Mr Humpherson believes these public comments meant that Planning NSW, the public servants and Planning Minister Refshauge knew that anything but consent would be unacceptable to the Premier and his Government.

The second event was the signing of a wood supply agreement by the Government (via State Forests) with Australian Silicon in February – two months prior to the determination in April of the charcoal plant application. Again, the Liberals feel this was a strong signal that consent had to be forthcoming even if there were concerns within other agencies or Planning NSW.

Concerns were expressed in both the Premier’s Department and Planning NSW that the signing of the agreement would compromise the process.

John Dermody, the Executive Director of the “Development Projects Unit” in the Premiers Department, according to the final page of the four-page memo, wrote to the Premier and Col Gellatly (Director General Premiers Dept) specifically raising concerns at how the signing of the wood supply agreement would compromise Planning NSW.

He wrote that: “Planning NSW would strongly prefer that any signing/announcement (of the wood supply) be delayed until after Minister Refshauge determines the DA/EIS process to avoid any potential criticism.
He further recommended that: “That the Premier not be involved in this process to avoid any claim by potential appellants or critics that the Premier has sought to influence Minister Refshauge’s determination in this matter or that Minister Refshauge (in a whole of Government sense) supports the agreement and has, therefore, predetermined the DA/EIS process.”

It would appear the wishes of Planning NSW not to be compromised were ignored.
Mr Humpherson told Mr Jones that the charcoal plant approval is an ‘ICAC thing’ – “It will go there.”

He Asked – “Have the proper processes been followed?” 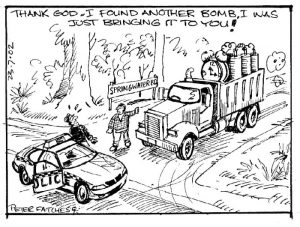 This entry was posted in Charcoalition, News Coverage. Bookmark the permalink.