Since the logging operation commenced, volunteer members of the community have been surveying the Mogo Forest, searching for fauna that would be adversely affected by the logging activities. They were also noting the presence of habitat and feed trees. The volunteers included members of Coastwatchers, Wires, and the National Parks Association of NSW.

They found the presence of the Greater Glider (Petauroides volans) – Endangered in NSW, and the Yellow-bellied Glider (Petaurus australis) – Vulnerable in NSW, in the Mogo State Forest, in the area being logged.

They also found wombat burrows. It is critical that logging contractors are aware of the presence of wombats and their burrows to avoid heavy machinery crushing the animals.

The Yellow-bellied glider feeds off the sap of specific trees and a Yellow-bellied Glider family requires a minimum feeding range of about 50 ha. Feed trees were found and the unique screech of this species was heard during the survey of the Mogo Forest. 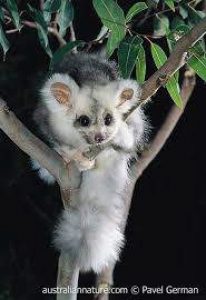 By contrast Greater Gliders, two of which were spotted, are leaf eating nocturnal forest dwelling animals.

Professor Lindenmayer describes Greater Gliders as flying koalas. The Greater Glider feeds exclusively on eucalypt leaves and buds and they occupy a relatively small home range of 1-3 ha. When disturbed by logging they rarely disperse to safety, and die in the remnants of their home range.

Both these gliding possum species are dependent on hollow trees, as the hollows provide the protection for their very survival. Without tree hollows they die. Tree hollows suitable for their survival generally only occur in trees more than a 100 years old, and these exist in the Mogo Forest.

Unfortunately, one of the characteristics of logged forests is the complete absence of the large old trees with multiple tree hollows. In blunt terms this means when the Forestry Corporation logs an area, they destroy the old habitat trees driving the Greater Glider and Yellow-bellied Glider to extinction.

So not only is NSW Forestry over logging, they are also converting the remaining forests into defacto plantations. Professor Lindenmayer describes the process as ‘Stand Simplification’.

The Forestry Corporation is required to undertake a pre logging survey of fauna and other matters.

In the case of the Mogo Forest, they undertook a “Claytons” Pre Logging Survey to detect the presence of threatened species. The survey, of 400 ha, was limited to a total of 18 hours because of budget constraints. In addition, because of Occupational Health and Safety Requirements, Forestry staff were not permitted to enter the deeper parts of the forest for nocturnal surveillance, the very time and place where these animals live. This makes a complete mockery of Forestry administration and procedures.

Coastwatchers understands that to cut costs further within the Forestry Corporation, it has been proposed that these pre-logging surveys be discontinued totally.

In addition to the detection of the gliders, the Mogo State Forest provides the habitat for other nationally listed endangered species, which have previously been recorded. They include the Glossy Black Cockatoos, Swift Parrots, and Spotted Tail Quolls. Further, NSW State listed species recorded include the Masked Owl, Powerful Owl, Sooty Owls and the Brush Tailed Phascogale.

On the one hand the NSW Government has a policy through the Office of Environment and Heritage to protect flora and fauna, especially endangered and vulnerable species, while another part of the same government, the Forestry Corporation of NSW, is hell bent on facilitating the destruction of the very same species.

What is it about this NSW Government, that they feel so compelled to destroy the environmental fabric of this State? The system is clearly broken, when the Forestry Corporation is incapable of acting diligently, professionally and meeting its statutory obligations.

It is critical that the NSW Government cease destroying the environmental values the community places so highly on its State Forests, and confine logging to plantation timbers. That, together with Carbon Credits, would turn Forestry into a profit making enterprise earning the State and community dollars, instead of broken basket case business losing millions.