For many years there have been many environmental battles to reduce or halt the logging of State Forests on the South Coast of NSW. They have never ended. The campaigns have been run by dedicated members of the community particularly further south in the Bega Shire, and both ends of Eurobodalla, where the logging has been more concentrated. The conflicts have now moved into the Mogo region. 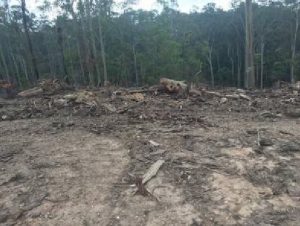 The Coastwatchers Association has stepped up to organise a Forest Forum meeting later in August in Moruya, to allow members, and the community, to voice their concerns.

NSW Forestry has been increasing logging intensity around Batemans Bay and recently commenced logging in the Mogo State Forest on the eastern side of the Princes Highway.

Suitable timber is becoming scarcer and scarcer, and the voracious greed for timber is never ending. One of the saddest aspects of the forest demolition, is that one day, suitable timber will simply run out, as the current logging practices and management are unsustainable. When that happens the pressure from loggers will not cease, they will simply shift their demands to log NSW National Parks.

The maintenance of successful sustainable logging depends on the rate of regeneration of the forests after logging, particularly of the required species. Get these calculations wrong, and the management of the State owned forests becomes a disaster. And that is what has happened in the southern forests, with the timber required for the wood chip mill at Eden. NSW Forestry totally underestimated regeneration rates, in some cases by well over 100%. The result is that more and more forests will be logged to meet the demand, until eventually the timber resource collapses. With the highly efficient modern logging machinery and the equally efficient milling equipment, the volumes of timber to meet the loggers demands to achieve financial breakeven point, end up exceeding the forest’s capacity to sustainably regrow. (See Professor David Lindenmeyer’s article in the Coastwatcher’s Newsletter on 8 February 2017, entitled “Things Fall Apart: Why do the Ecosystems we Depend on Collapse?)

As reported in an earlier Coastwatchers Newsletter, Koalas are near extinct in NSW, and some were recently found in the Bega Valley Shire, in the Bermagui– Murrah, Mumbulla and Tanja regions. The population was well documented, with the number of known koalas being between 50 and 60.

As a result logging plans for the area were halted, and the three State Forests, the Murrah, Mumbulla and Tanja, together with the southern half of Bermagui State Forest, were reclassified by the NSW Government in early 2016, as the Murrah Flora Reserve.

The naming of the area as a Flora Reserve, and not a National Park, was not an accident. It was a deliberate strategy, so that if the Koalas die out, the ‘Flora Reserve’ can be reclassified in a pen stroke to ‘Forest’, and all the timber logged.

While that creation of the Flora Reserve was welcomed by the environmental movement to save the near extinct Koalas, the loggers still demanded their timber. And that is why the harvest pressure was transferred to the Batemans Bay and Mogo State Forests. And as a sweetener to the transport sector, the NSW Government offered “additional” transport subsidies ($2.5 million) to cover the additional transport costs.

What other sectors in NSW gets such protection when costs increase? It appears the loggers live in a sheltered workshop, with no pressure from market forces.