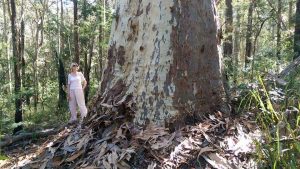 A South Durras resident appreciating the old growth forest in the area.

The axing of E3 zoning in the Eurobodalla is just one of Coastwatchers’ concerns about the Eurobodalla Shire Council’s Rural Lands Strategy, currently on public display.

“High conservation value forest and wetlands were protected by E3, but not under the new R4 zoning,” spokesman Noel Plumb.

“The council has dispensed with E3 zoning and largely zoned that land as rural. They are also proposing to open up a wide range of uses for that land.

“It will severely damage the forest canopy, and endanger wildlife.”

“(Wetland grazing) has been prohibited for nearly 50 years. The mayor says there is no question of them being grazed – if that’s the case, why put forward a proposal allowing grazing?”

Mr Plumb said many of the coast’s most iconic wildlife species – such as greater gliders and the glossy black cockatoo – would lose out under the new strategy.

He says if the natural beauty of the Eurobodalla is spoilt, its tourism industry will follow.

“This proposal could change the image of the Eurobodalla from the nature coast to the naked coast,” he said.

“The damage will be obvious to residents and visitors over time. Tourism is our biggest and fastest growing industry.”

Mr Plum said tourism was not the only industry under threat from the proposed changes: “Oysters are highly sensitive to any pollution. This proposal has the potential to damage or ruin the local oyster industry’s reputation.”

Eurobodalla Shire Mayor, Liz Innes, said the removal of E3 zoning would not have a negative impact on the environment.

“The idea that rezoning will have a negative impact on the shire’s biodiversity is not the case,” she said.

“Biodiversity is, and continues to be, protected by NSW Government legislation. Important environmental land in Eurobodalla is already appropriately zoned with an environmental E2 zoning.

“We will not be removing any existing E2 zoning.

“A large portion of environmental lands along the Eurobodalla coast is already protected in National Park and zoned accordingly.

“The Rural Lands Strategy was prepared over many years with an enormous amount of input from all parties involved.

“I would like people to understand this is also about privately-owned rural land, not just public land.

“This is the final stage of implementing the Rural Lands Strategy, which was adopted by Council in July 2016.

“This is not about revisiting past decisions. All of these issues have already been considered.”