The Need to Preserve Old Trees for the Conservation of Wildlife 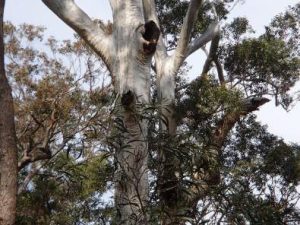 The NSW Government is still allowing the logging of native forests, including in some areas old growth forests, here on the South Coast of NSW. This article was submitted by John Perkins to remind members of the critical significance of old trees.
As you all know trees provide resources for wildlife – for foraging, shelter, roosting and nesting. However, trees which contain hollows are particularly important for those species of animals, including many threatened species, which specifically require hollows for shelter and nesting. Any decrease in the availability and natural diversity of hollows can lead to significant loss of hollow dependent animal species, diversity and abundance. In some cases it may result in local extinction of these species.
Where older trees with hollows die out or are felled, and regrowth trees prevail, animal diversity is drastically reduced. 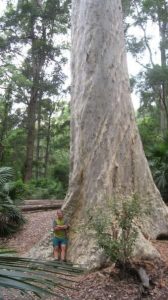 The continued viability of the Yellow Belly Glider (Petaurus australis) is totally reliant on large areas of unfragmented forests, with suitable feed trees and tree hollows.
The Greater Glider (Petauroides volans) is particularly sensitive to native forest logging, as they have relatively small home ranges. In research carried out by CSIRO (Hugh Tyndale-Biscoe) in the 1960s, they found the Greater Glider stayed faithful to their home range even after severe logging, and died in situ, rather than move to adjacent undisturbed forest. Massive losses occurred. 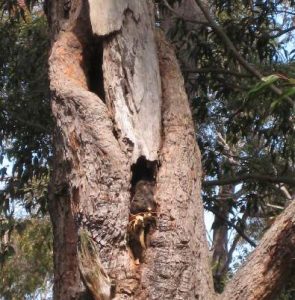 Large old trees are invaluable. Many are 200 to 800 years old, and some are even older. Such trees represent the vestiges of once-intact ecosystems and provide some sense of what the landscape was like before the arrival of the Europeans.
By virtue of their size, older trees provide more food and nesting resources than younger trees. For example a 300 year old tree with a height of 20 metres and a trunk diameter of 1.5 metres has a bark surface area of approximately 94 square metres. By contrast a 20 year old tree with a trunk surface area of 20 cm and a height of 15 metres has a bark surface area of just 9 square metres. The larger older tree is therefore equivalent to 10 smaller trees, at the same time decreasing the risk of predation, as wildlife need nottravel from one tree to the next as often.

Big, old, healthy trees produce more nectar, foliage and fruits than younger trees. These highly productive nectar sources are vital to the survival of some wildlife species, providing energy to nectar feeders such as the Regent Honeyeater (Anthochaera phrygia) and the Musk Lorrikeet (Glossopsitta concinna). Other species can rely on insects that are dependent on the nectar, such as the Brush-tailed Phascogale (Phascogale rapoatafa).

This entry was posted in 2017, Biodiversity, Ecology, Forests and Forestry. Bookmark the permalink.