Roaming domestic cats are a significant conservation issue because they may hunt, harass and compete with wildlife. They hunt, among other things, birds, lizards, frogs and many native mammals including bandicoots and gliders in the Eurobodalla. There are also concerns about unrestrained roaming domestic cats because of risks to cat welfare, including cats fighting and getting injured.

What is the program?

Eurobodalla Shire Council is offering a free CatBib to all cat owners who have a microchipped and registered cat (or cats) in eligible areas. 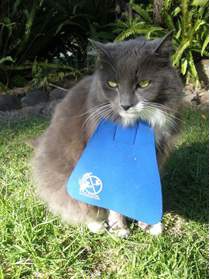 Where are the Eligible Areas?

These villages and hamlets have been specifically selected as it is where the greatest number of native wildlife live and is therefore the initial priority of this program.

Why a CatBib and Not a Collar with a Bell?

Murdoch University Research has scientifically proven that CatBibs work to stop over 80% of cats from catching birds and reduce small animal predation by almost half. The CatBib acts as a barrier between the cat and its prey. When the cat pounces, the bib gets in the way, which allows the split second needed for escape. It also serves as a brighly coloured visual warning as the cat creeps up on its victim.

How Does It Work?

The CatBib is attached to the cat’s collar and hangs loosely over the cat’s chest. It works by gently interfering with the precise timing, and coordination a cat needs for successful bird catching. The CatBib comes between the cat and the bird just at the last moment. It doesn’t interfere with any of the cat’s other activities, The CatBib only affects the cat’s ability to catch birds (and reduces cats from fighting). A cat wearing a CatBib can run, jump, climp trees, eat, sleep, scratch and groom.

How do I get a Free CatBib?

If you are interested in receiving a free CatBib and would like further information about the program and eligibility, please contact Courtney Fink-Downes at Eurobodalla Shire Council on 4474 7493.

This entry was posted in 2017, Cats, Pests. Bookmark the permalink.