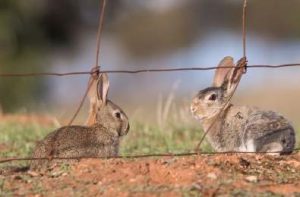 A new Korean strain of calicivirus virus has been released across the Eurobodalla Shire, and will hopefully result in a dramatic reduction in wild rabbits.

This new strain of calicivirus is highly
contagious, and can kill rabbits within
24 hours. It is spread by flies, when the
flies are attracted to dying rabbits.
Those flies then carry that virus into the healthy rabbit population.

The release of this new strain is expected to be successful in the Eurobodalla because the climate is cool and wet. When the original strain of calcivirus was released in 1996 in Eurobodalla, it had an initial impact, then waned as resistance within the rabbit population built.

The new strain is more contagious and has been released in a coordinated plan. The 1996 release was undermined when some locals released the virus into the region unlawfully, reducing the impact from a coordinated release.

Rabbits nationally are Australia’s worst vertebrate pest species, causing up to $200 million in lost agricultural production and contributing to the destruction of native vegetation.

The Eurobodalla Council will follow the re-introduction of the calicivirus with contract shooters to target remaining rabbits. These shooters operate during the nights with telescopic air rifles and night vision equipment. Safety is a key consideration.

It is hoped that the rabbit population is significantly reduced, especially in hotspots like Durras and Broulee. This will assist with the regeneration of Landcare plantings as well as protecting remnant dune plant species.

This entry was posted in 2017, Pests, Rabbits. Bookmark the permalink.