In May this year I notified Coastwatchers members of the death of Martyn Phillips, a long serving member of the Association and an extremely capable past President. Martyn died after losing his second battle with cancer. 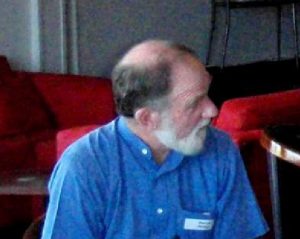 Martyn had a critical role in the management of the Association over a 16 year period, and the Association acknowledges that enormous voluntary contribution with extreme gratitude.

Before moving to the Deua Valley, Martyn had served in the Royal Australian Air Force. He joined in 1970, and this job took him and Jan to Darwin where Kate was born. Later in the 1970’s they were posted to Malaysia where Amy was born. After various postings in Australia, he was seconded to the United States Air Force for three years in the early 1980s.

Around this time, in his mid 30’s Martyn became seriously ill for the first time. He was diagnosed with metastatic melanoma cancer, which spread to other parts of his body. He fought this aggressively, taking every treatment offered, including the removal of most of his right lung.

In 1985 Martyn retired from the Air Force and with his family moved to their property in the Deua Valley, which he and Jan had bought 15 years earlier. The move and change in lifestyle did wonders, and he was cured of his cancer.

He became a member of the Coastwatchers Association as he appreciated deeply the special environmental qualities of the region. He volunteered many hours and much expertise to keeping the environment the way it was for future generations. He was particularly involved in the protection of Deua Old Growth Forests from logging, having areas removed and transferred from NSW Forestry’s control to the Deua National Park. His work on the extension of National Parks in southern NSW was publically acknowledged by the NSW Government in 2000.

Martyn has been described in correspondence to me by members “as a lovely bloke”, “a good man”, “a very fine man”. He was a gentleman.

On behalf of the Association I pass on my deepest condolences to Jan and Martyn’s two daughters, Kate and Amy.