Farewell to Maureen and Jim Baker

The Association has farewelled two of its greatest supporters and environmental warriors, with the departure of Maureen and Jim Baker in early July, moving closer to Sydney to be nearer to their family.

Maureen and Jim have been members of the Coastwatchers Association for over 25 years, and both have given unflinching support and service to the Association. Maureen was a Committee member for four years from 1994-95 to 1997-98. 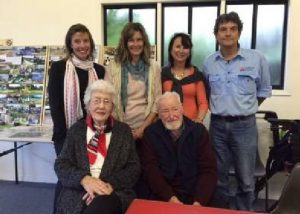 Maureen and Jim at a recent farewell

Maureen was a member of the Coastwatchers Environment Fund Committee for over a decade, and her sound advice and critical approach will be missed.

Jim and Maureen were not only involved with the Coastwatchers Association, but founded the highly successful Tuross Lakes Preservation Group in the early 1990s. The Group became one of the inaugural ‘Landcare’ groups to operate in the Eurobodalla Shire.

Maureen and Jim were also involved with Shire wide Estuary Management Committees as well at with NPWS Committees. Maureen served on the Eurobodalla Shire’s Coastal Management Advisory Committee. In between all these activities, Maureen completed an environmental degree in her retirement.

For over 25 years Jim and Maureen have campaigned strongly to protect community and environmental issues, dedicating thousands of hours of voluntary time towards advocacy and on-ground environmental works.

Maureen received an Order of Australia Medal for her volunteer efforts and her dedicated commitment to the environment.

The Association thanks Maureen and Jim for their enormous voluntary contribution to environmental issues in the South Coast region, and wishes them every success in their second attempt at retirement.