The resident Pied Oystercatchers (Haematopus longirostris) at the Batemans Bay Marina, have nested on the sandflats for many years. The species is on the NSW endangered species list. However, their welcome is about to finish, because of their exposure to predators, curious humans, and more development in the area. 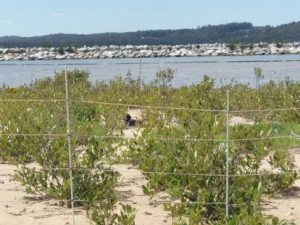 Their nesting site is located in one of the most urban parts of Batemans Bay and attracts many visitors. The NPWS guard the site with an electric fence.

The oystercatchers nesting site is on one of the best nesting sand-flats in the local area. It is a supermarket for foraging shorebirds – ideal for pipis, beach worms and crustaceans. 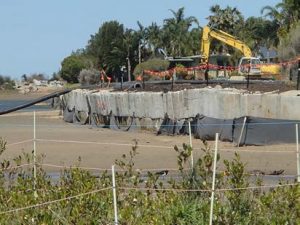 Coastwatchers understands the Development Approval for the dredging of the area east of the marina precinct (in the area of the endangered oystercatchers) had a limitation placed on the duration of the operation so it could only be carried on during the winter months of June and July, outside the breeding season.

This window was extended to end in September 2016, despite the expert advice contained in the original application. Spring is the start of the breeding season.

The resident pair of Pied Oystercatchers, have had a challenging and sad time over this summer nesting season. A 3 egg nest was laid in late September 2016. 35 days later at the end of October, three chicks hatched. 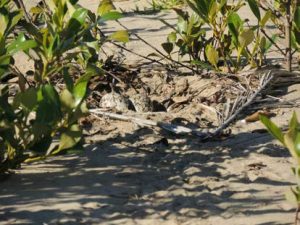 On the second day these chicks were caught up in textile fencing, which was part of the development works occurring at the Marina site. They were rescued by shorebird volunteers but disappeared the following day. In November, the pair re-nested with a 2 egg nest.

Because of a predators and humans at this site, an electric fence was installed by the NPWS around this nesting area to protect them. If these problems were not bad enough, high tides at hatching time in December came close to destroying the site, and crippled the electric charger through water inundation.

By Christmas only a single Pied Oystercatcher chick had survived. If it continues to survive it will fledge in early February. In the next month it seems highly unlikely it will survive the curiosity of tourists, the predators, the development work and the destruction of its habitat.

When its time for the Pied Oystercatchers parents to leave, and with an enormous amount of luck take the surviving chick with them, the Batemans Bay Marina may well lose an icon. This species cannot survive in this area, and it is hoped they find an alternate nesting site, despite their homing instincts.

This entry was posted in 2017, Fauna, Pied Oystercatcher, Your Local Environment. Bookmark the permalink.