Silviculture – Use of Tordon by State Forests

STOP PRESS – 10 October 2001
As a result of community concern, State Forests of NSW has ceased using the chemical Tordon as part of its “management practices” in forests around Batemans Bay. There will be a review over the next couple of months to ascertain whether the practice will be resumed or not. Regardless of this, the Charcoalition:
•is seeking absolute assurances that none of the thousands of trees already poisoned will end up in the charcoal plant;
•wants to know the health and environmental implications if any of these poisoned trees do end up in the charcoal plant, either accidently or by design;

Silviculture will remain on the Charcoalition’s agenda until we are convinced that not one of these poisoned trees will end up in the charcoal plant.

Trees in our area are being poisoned with Tordon. State Forests say these trees won’t be for charcoal use but will be used if marketable. 16 people have been employed for 5 years, commencing about six months ago, to “thin stands”. This is a procedure of forest thinning or “management” called “silvicultural practice”. It is claimed that this practice will help State Forests meet the quota commitments for the next 20 years – we fail to understand how this can be so.

Observers have claimed that they have seen sap (presumably laden with Tordon) oozing from these trees (and being washed into catchments).

The trees being poisoned are of the charcoal-preferred varieties.

Poisoning is occurring in the plant vicinity and in areas that are easy to log.

State Forests and the company deny that any of these poisoned trees will end up in the charcoal plant. However, we have been told by workers actually doing the poisoning that these trees are destined for the charcoal plant. The charcoal plant needs trees to be dried to 25% moisture content, which takes about twelve months. There will be a great number of poisoned trees in the local area that will be ripe for the plant as soon as it starts up! Of course, it would be quite OK to use these trees in the charcoal plant because they were poisoned as part of the Silviculture scheme, thereby not breaking the Company’s golden rule that “NO TREE WILL BE CUT DOWN FOR THE SOLE PURPOSE OF CHARCOAL PRODUCTION”.

IF these poison-laden trees do find their way to the charcoal plant, what additional deadly toxins will be emitted or leach into the nearby wetlands?

The Silviculture workers are subjected to urine tests frequently, presumably to test for chemical residue.

State Forests say that these Tordon-laden trees will most likely end up as fence posts or firewood.

The following questions regarding this practice were recently asked in the NSW State Parliament, for Eden Monaro Greens. Keep posted for answers: 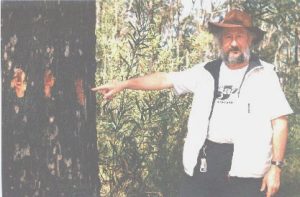 This picture of tree poisoning was taken off Maulbrooks Road near the charcoal plant site. The “bullet” holes seen around the trunks are drill hoses which were filled with Tordon.

Questions to Parliament re tree poisoning and proposed charcoal refinery at Moruya.

1 Have any of the trees poisoned in the Southern Region forests been poisoned in anticipation of the proposed Charcoal production plant.?

2 Has timber from the Southern Region been tested for suitability for charcoal production?

3 Specifically, what is the scope of the tree poisoning?

6 Can trees which have been poisoned in this way be safely used as domestic firewood?

7 What is the budget allocation for poisoning trees in the Southern Region for the past year and next year?

8 Given that 16 workers have been poisoning trees in the area since March,
(a) what proportion of their time is spent in this activity.
(b) is an increase in this activity planned in the next year? If so, to what extent?

9 What specific research documents underpin the use of this practice as a form of silviculture?

10 What documents have been presented to Minister Yeaden’s office and the Premier’s office concerning the proposed charcoal production plant near Moruya?

This entry was posted in Charcoalition, Forests and Forestry. Bookmark the permalink.