Local citizen scientists from the ‘Wildlife of the Central Highlands’ Group, had found protected habitats for the Leadbeater’s Possum within the area. With the bulldozers already at work Environmental Justice Australia (previously the Victorian Environmental Defenders Office) reported the matter to the Environment Department and VicForests, on behalf of four local community groups, and demanded that logging stop. 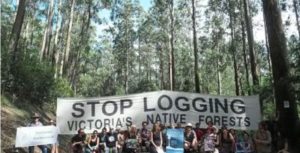 The Victorian Government called a temporary halt to logging operations and commenced an investigation. This was despite the fact that part of the forest in the coupe had already been destroyed. Local citizen scientists – who suspected there were threatened species in the area – then worked into the early hours of the morning and found the colony of Leadbeater’s Possums.

Logging was halted by VicForests, and the colony of Leadbeater’s Possums saved. The Victorian Environment Department is currently investigating this logging activity. It is illegal in Victoria to log habitat, which contains endangered species.

Coastwatchers Members will be kept informed of the outcome of this matter. One scenario is that the Victorian Environment Department could end up suing VicForests, another Government agency. The law in NSW is quite the opposite, where timber is far more important than endangered or vulnerable species, such as the Yellowed-bellied Glider or the Greater Glider found in the Mogo Forest.